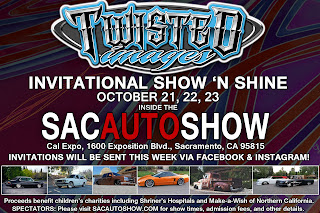 Last weekend we set up a room inside the Sacramento International Auto Show to display a fun mix of custom rides built by local shops and enthusiasts. With space limited, we made this an "invitational" show, so each of the cars and trucks in here were picked because they represent a slice of the local custom scene. There was something for just about everybody- check out the photos!

Building 4 at Cal Expo became our home for the weekend.

Looks big until you start filling it with cars and trucks!

Aaron's Lexus LS430 sits on Work wheels, with an aftermarket controller on the factory air suspension. The interior is full of LED lighting and TVs.

Aaron also brought out a pair of Acura NSXes - always a crowd pleaser! Both of these have Comptech superchargers and a host of other go-fast bits.

Chad from Severed Ties brought this monster in - he calls it the "Silver Baller" It's on custom links with air suspension, and sits on 24" American Force wheels.

Brad's Porsche Cayman S had a bunch of nice custom touches- after this weekend he's thinking about air suspension!

This BMW 2002 is packing a full Honda S2000 drivetrain- down to the gauge cluster in the dash! The interior is fully custom as well, with lots of ostrich covering the dash and door panels.

Eric's Scion xB was a huge hit with everyone that came through the room. The custom plexiglas hatch with a 40" TV and a booming sound system kept the room rocking all weekend!

This MK6 Volkswagen Jetta sits perfectly on Rotiform wheels and Air Lift Performance suspension. He's got plans for some upgrades for next year, too!

Another Volkswagen that was a big attention-grabber was Mike's Harlequin Golf. This rare factory color option had a lot of people scratching their heads, and the turbo'ed VR6 under the hood is definitely impressive!

Juergen's 'bagged Mini Cooper S has a TON of nice custom touches, and sits down perfectly with the splitter touching the ground.

I brought the 510 out to the show, of course. It's just about ready for SEMA next week- still a few things to button up, but it still got plenty of attention at the show!

Miles brought a few rides out this weekend, and of course they ALL caught the spectators' eyes! The mini truck on the deck is a chopped, doored, bobbed, turbo'ed Toyota pickup with custom front and rear ends- it'll need its own blog post to go over it all!
The hauler (the "Baller Hauler" as he calls it) is a heavily modified Isuzu NPR, sitting on air suspension and semi truck wheels. More on both of these rides soon!

Miles' other ride at the show was his "Ridiculous" Isuzu Rodeo. Again, too many mods to list here! It was fun watching people walk by and try to figure out what it used to be in its former life!

Victor brought out his '68 Datsun 510 wagon to display. It sits on a rare set of Walter Wolf Racing wheels, and has a mean-sounding 2.3L engine under the hood. It's getting rare to see clean 510s these days!

If you follow my Instagram page, you've probably seen my 510 being towed by this monster! It's a '49 Chevy pickup with a Cummins 12 valve diesel under the hood. Sitting on air suspension, of course! This thing is absolutely a work truck, hauling projects all over the place!

Riley parked his beautiful '86 BMW e28 on the trailer for the show. Sporting an M60 V8 under the hood from a later model 5-series, this thing sounds as mean as it looks!

Scott from Clean Concepts brought out his Silverado, which lays down over 28" wheels. This one got a bunch of "how do you drive that thing?" comments this weekend!

Scott also brought out the 'bagged cop car. With the lights flashing for most of the show, it was a hit!

Spencer's '72 C10, with a forward-tilt hood and a bunch of custom frame work exposed in the bed, probably gave other customizers some ideas for their rides!

The car with the most traffic around it by far was Jeff's 1960 Cadillac convertible. This car JUST got finished up last week, and this was its debut show. Fresh and flawless black paint, beautiful red leather interior, and blinding chrome combined to command attention all weekend long! We actually had to put stanchions around this one to keep people from touching it- it almost looked to good to be real!
Overall, we had a blast, and I got to meet a bunch of new people and discuss their custom projects. We'll be back again next year, and we hope you'll come check us out!
Read More
(0) Comments

This weekend we dragged the Datsun 510 up to Plymouth, California to check out No Limits Car Club's Scrape and Scare show. The rain kept some people away, but those that came through had an incredible time! Lots of clean custom rides, and lots to do- burnout contest, limbo, and the attending clubs even got in on some tug of war and "water" pong games as well!
They'll be holding this show again next year on October 20th through 22nd- if you can make it I'd highly recommend this show!
Pictures: