Posted by Phil on 3/10/2020 to Shop Projects & Shows
So... I went and did a thing.
A thing I tell everyone NOT to do.  A thing I've done several times before, yet here I go again.  I brought another project car home when I already have plenty here to work on!
But when a car calls out to you, it would be heartless to ignore that call, right?  Right?
There I was, minding my business, hanging out with my wife on the couch and cruising through Instagram, when a message pops up.  A friend had sent a Facebook Marketplace listing for a rusted old Datsun, and it was actually close to where I live!  Ever since I moved to Oklahoma last year I've been going through Datsun withdrawals- aside from a couple of Zs at shows I haven't seen a whole lot out here.
I tried to stay strong, but the more I looked at those pictures in the listing the more intrigued I became.  I tried to put those old familiar feelings aside- I really did!
"I know- I'll show my wife this listing.  She'll shut the whole idea down in a heartbeat and I can go back to my normal life," I thought.
So imagine my surprise when she said, "That's really cute- you should buy that!" - what an enabler!  I messaged the seller, drove out with my wife the next day to check it out, and now I've got another project on my hands!
Here are the original pictures from the listing: 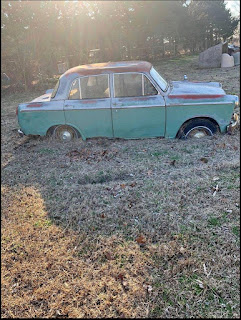 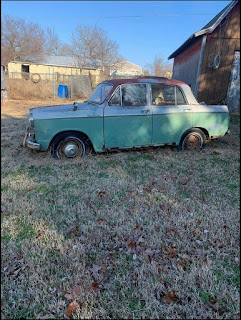 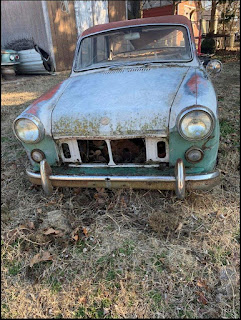 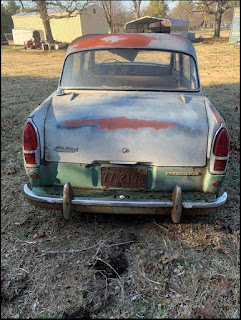 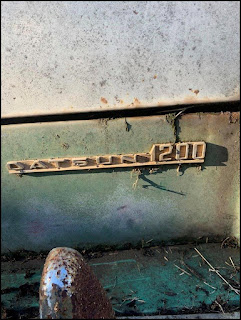 The seller, Ray, bought this car from his sister in law when he moved from Indiana down to Oklahoma in 1976.  Once he got down here, he drove the car for a couple of months, until it needed a valve adjustment.  Apparently he adjusted things a bit too tightly and damaged the cam, so he pulled the cam out to replace it.  But he couldn't find a replacement, and the car sat exactly where it was from 1976 until 2020!
Here are the pictures I took when we drove up to look at it for the first time: 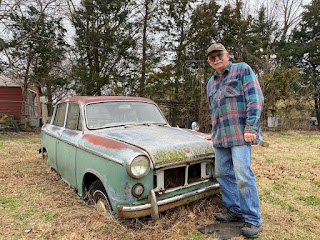 This is Ray, the fella that sold the car to us. 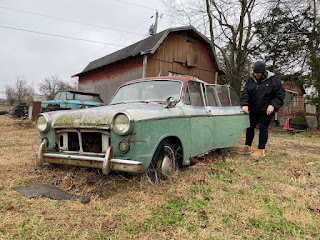 And this is my wife Victoria, checking out the only door I was able to get open! 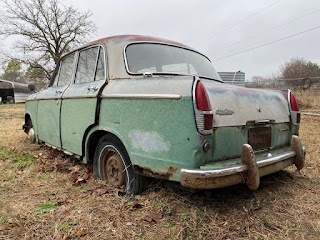 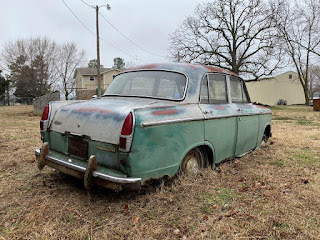 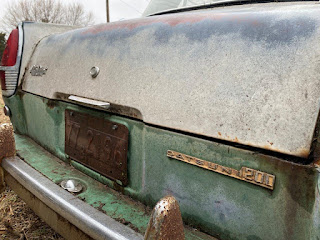 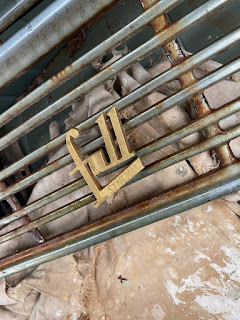 Here's the grille that he kept inside the car- check out that badge!
A few days after Victoria and I drove up and left a deposit with Ray, I headed back up with a buddy with my truck and trailer to dig this car out of the ground.  Based on the rust in the rockers and floors I was worried that there wasn't going to be much left underneath, but I brought shovels and my trailer has a winch so I was hopeful I wouldn't leave empty handed.
After some maneuvering through his property we got the trailer lined up, and thankfully the ground was soft enough that I was able to dig around the front end enough to get a couple of straps around the front frame horns.  30 or so minutes later and the deal was done- I was the proud owner of a 1964 Datsun 312! 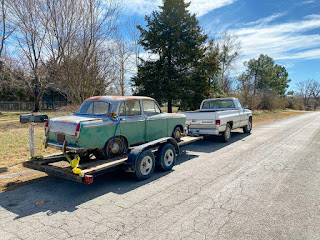 We headed from Ray's house to a nearby gas station, and while I filled the truck's tanks I started taking actual inventory of the car. 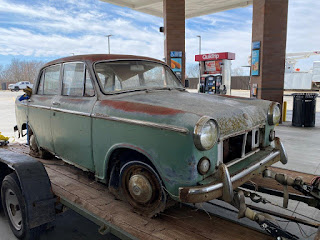 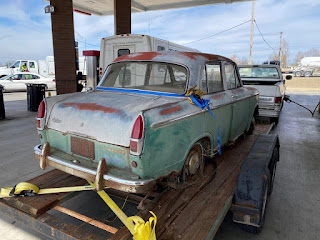 The floors and rocker panels are toast of course, but the frame is actually really solid- it seems the dirt/mud preserved it rather than rotting it out.  The trunk floor is even completely intact- at least from the outside!  The main draw with this car, though, is how original and complete it is.  So far I think the only missing part is one hubcap- all of the trim, every light and lens, and all of the interior parts are there- they all need a lot of love, but at least I won't have to hunt down a bunch of rare pieces!
We dragged the car home, and I shuffled the other cars around to make room for the car and trailer inside my shop. 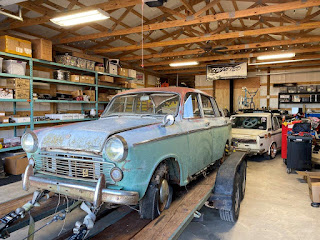 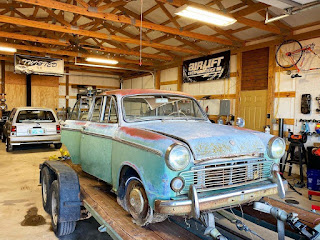 I HAD to put the grille back where it belongs, just to see what the car looks like with a proper face!
I also started working on getting the doors open- with the car stuck on the trailer I couldn't do much, but I was able to get everything but the driver door and trunk.
I found a new set of whitewalls online and got to work pulling the wheels off. 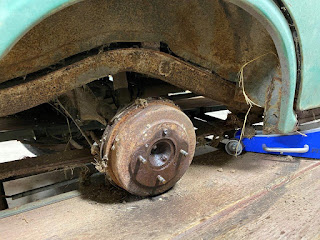 I used heat and PB blast, but a few studs decided to play dirty anyway.  I'll be going through all of the brakes and suspension anyway, so as long as I had two working studs per wheel I was OK. 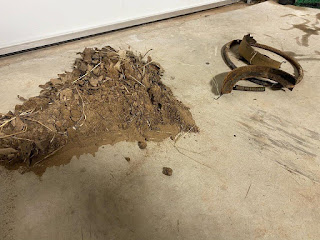 The passenger front wheel wouldn't turn, so I pulled the whole hub apart and cleared it of mud, dirt, spiders, and the brake hardware.  The bearings on both front wheels stayed sealed through the years, so once I got all of the debris cleared out it's rolling nice and smoothly for now.
The rears are still being a bit stubborn, and I wasn't able to get the drums off of the axles, but they rolled well enough to get the car off the trailer once I get some tires on those wheels... 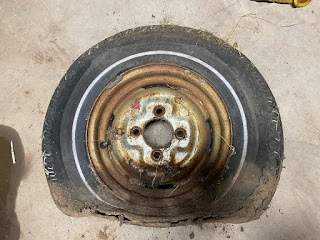 Yeah, these old tires aren't going to get me anywhere!
I started putting my only other set of 4x114.3 wheels on the car, but the rears wouldn't quite clear the leaf springs... so you'll just have to settle for this glamour shot of the front! 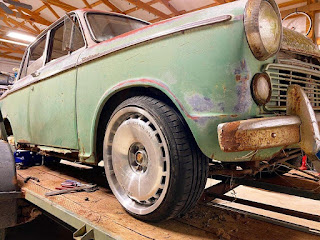 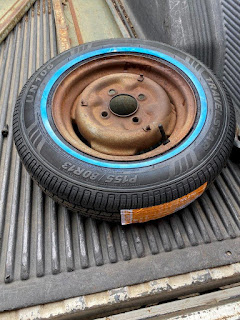 Tires came in a couple days later, so I ran down and got them mounted with some new valve stems.  I think I'm going to refinish the wheels in an off-white color, but for now I just need round things that hold air.

Wheels bolted back up to the car, and I pulled the trailer back out front so I could sweep up all of the dirt that fell out while I was beating on those hubs 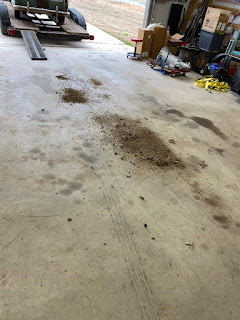 Ramps down, winch out, and the car was in the shop on all four wheels! 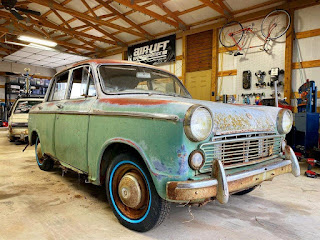 I was able to get the driver door open, and I got inside to get more work done. 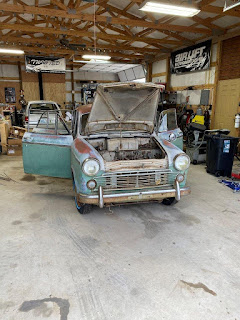 First, I pushed up on the roof to undo the "goat damage" from sitting in that field: 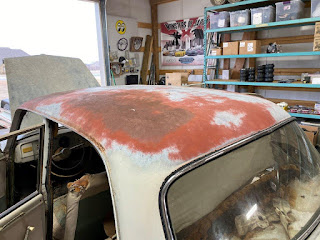 Then I pulled the driver door panel off to get the lock cylinder out- it's off at the locksmith so I can finally get into the trunk! 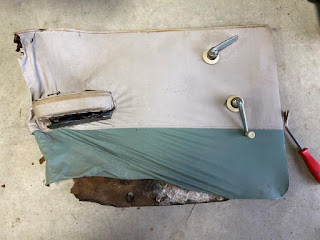 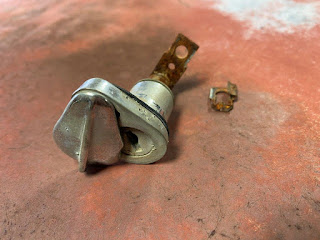 So far things are coming apart smoothly with a bit of penetrating oil on the more stubborn parts.  I don't have high hopes for this engine, though! 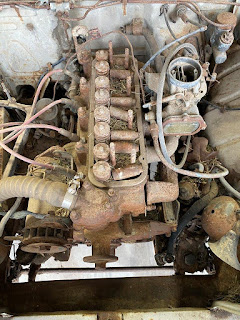 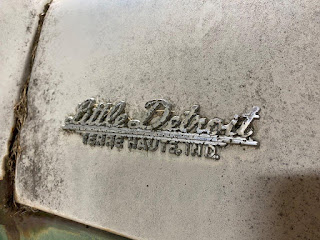 Love this trunk badge- I'm trying to hunt down a matching license frame..

So that's where we're at as of today.  I REALLY need to set this one aside for a bit to wrap up a couple of other projects, but I'll sneak over and throw some time at this one as I can.
Gonna call her "Redemption" - the plan is to keep this one mostly stock mechanically and cosmetically.  Maybe a mild drop, but maybe not even that.  Repair the rust and body damage, keep the patina, get everything working, and enjoy a rare little piece of Datsun history.  Hopefully this will be my redemption for basically doing the exact opposite with my 510! 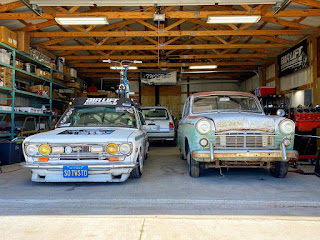 510 and 312 sitting side by side in the shop- identical cousins!
Previous Post
Next Post
Information
Browse By Category